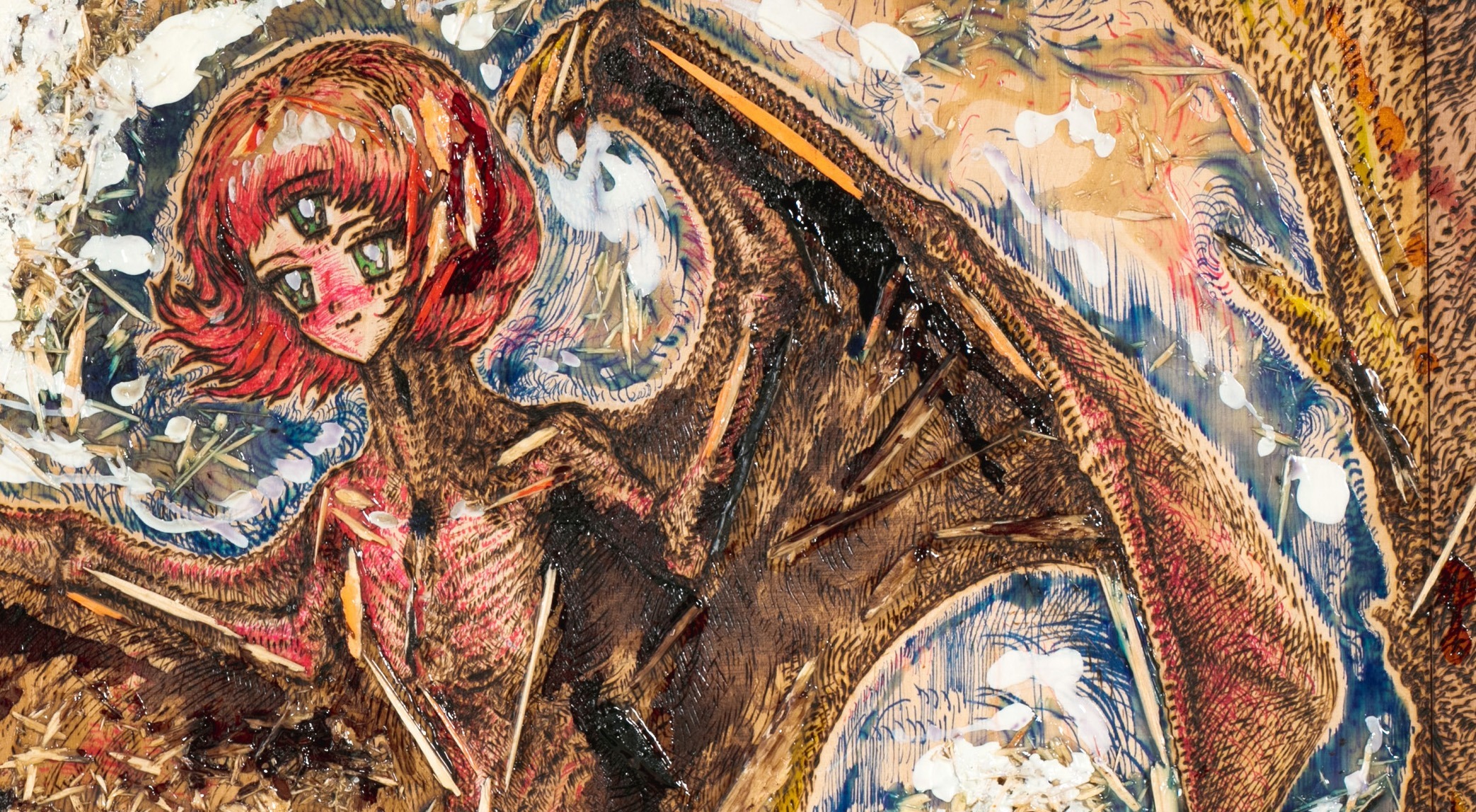 VLADEY opens the autumn art season with the first solo exhibition of a mysterious artist from Saint-Petersburg!

Where's before, where's after

Fedor Hiroshige, also known as a mushroom-man, is a dweller of Peterburg but can also be seen around. Since a few years ago, Fedor has been sharing the studio with yet another master of wooden art, artist Nestor Engelke; however, their approaches towards the material differ. Engelke prefers to highlight it is made out of wood; Hiroshige, on the contrary, wants the wood to resemble scrolls or discoloured photos; paperback or glass mosaic, discovering many unusual but hidden traits to the wooden plaque. Wooden shavings become one of the main characters of the exhibition. In this universe of a display, they appear from the horn of plenty, the primary source of blessing. The artist uses scraps — some of them still carry the structure of the wood, and some of them are dissolved into dust — to create texture. According to Hiroshige, this pro-cess resembles working with vector graphics, when the image comes together from the many primaeval digital particles. The leap between the "whole" and the "diversified" captivates and fascinates the artist. Maybe it has to do with his alter-ego — a mushroom-man: not only some-thing capped and on a stipe, but also mycelium, which might appear as a fruiting body, or can spread out in many threads. Thus, one should expect the journey offered by Hiroshige to be very different from what it seems from afar.

The works chosen by Fedor Hiroshige hardly correlate with the white cube: as if two spaces strangely collided together. Massive and bold, these mosaic panels can still be seen as monu-mental art made for a particular interior due to an outdated cultural habit. The gallery cannot possibly resemble this particular interior as it offers a "neutral" space. Hiroshige's exhibition is neither a series nor an installation, claiming the transformation of the room, but a set of frag-ments. If there is a space these artworks were made for, how would it look like, what would its purpose be?

Hiroshige's many characters evoke almost iconographic curiosity. One can imagine oneself to be Aby Warburg, unravelling the mystery of Palazzo Schifanoia. The images of long-legged girls from Pretty Guardian Sailor Moon serve as a reference to the four planets — Saturn, Mars, Pluto, and Venus — by the characters' name and, possibly, by their powers. It is not apparent which of the existing yet coming from antiquity takes on the connection between the gods and planets, and planets and character traits concern the artist more. Is Saturn here a symbol of mel-ancholy, a modern likeness of a fertility god, or is it just a tangle of the meanings? Why is Ve-nus riding her horse the wrong way round, bearing a resemblance to Ivan-the-Fool? The artist refuses to offer a single key to this conundrum, playing games by telling stories of Pluto-girl posing as Delacroix' Liberty, while the size of Pluto-planet equals the area of the whole territory of Russia. There's no room for elegant interpretation, but one can suggest the very particular space these panels were created for might hide the secrets of the world order.

Artefacts are placed around the halls, covered with inscriptions and supposedly giving addition-al clues: a throne, a couch, a book, a step-ladder. So, it could be a palace reception hall, a noble lord's library, or just a dormitory. The emperor or the sovereign is mentioned in many texts and appears in many of the images within this space. The artist hints one might find a fox and a lion in these halls, referring to the Machiavelli treatise — the one that suggests the knowledge about these two symbols might be used for a successful reign. One can easily find the fox, although it has turned into a werewolf with nine tails. The lion hasn't changed much: it appears as a dino-saur, grinning at the feet of Mars. Not only images of strong and calculating rulers inhabit this space; royal fools and wise philosophers are also included in the list of characters because the emperor can be whatever.

Long story short: how he got crowned

Hiroshige unites various quotes into funnels, dragging the viewer into very distant journeys. Following some of them will remind you of studying conspiracy theories or reading another Pelevin's novel; others will lead to a unicorn that yells: "Cogito!". Yet, what do palaces and emperors have to do with it? After all, it is unlikely that the fractional, polysyllabic narrative offered within the exhibition view serves as a commentary on the current political situation. However, the Red Chamber mentioned in the title of the exhibition, and the yellow Kremlin on one of the works, remind us that even fantasies — especially fantasies — are occupied by ideo-logical tension.

Hiroshige tosses many keys, a couple of them you might catch. One of them is Borges' story Aleph. One of the artworks here — the image of an eye — holds the same name. The protago-nist of Borges' work faces something that allows him to see everything that happens in the uni-verse at once. This experience turns out to be terrifying for him, but, fortunately, Aleph turns out to be destroyed, and he manages to get rid of superknowledge by just having a good night's sleep. One of the epigraphs to the story is a line from Hamlet: "O God, I could be bounded in a nutshell and count myself a king of infinite space". The quote used by Hiroshige as an epigraph to the exhibition, placing it on the throne — Imperare sibi maximum imperium est (Command-ing oneself is the greatest power) — is also a description of an unimaginable experience of gaining superpowers, the ones you wouldn't wish upon your enemy.

Here's the second key. Having learned a little about the artist's works, it's easy to guess that Eastern religious practices are also included in the sphere of his interests. In Tibetan Buddhism, there is a rite of mandalas, which are built/drawn following the concept of the "all-perfect pal-ace" to become a repository of some divine energy. At the end of the ritual, the mandala is de-stroyed, and parishioners and others dismantle the sand it was created with. The deity remains in the sand; Emperor Hiroshige can be reflected in anything or be locked up anywhere. But here, we will dwell on the fact that the destruction of the palace, according to this religious tra-dition, changes the energy of the world or, let's say, has a therapeutic effect.

Mark Fisher, one of the theorists behind "hauntology", described the current state of society as a situation of "homogenization of time and space". The combination of fragments of past eras — a symptom of our generation — has become so commonplace in everyday life and art that no one notices it anymore. The forests of quotations that Hiroshige proposes to wade through are a ghostly land left for those taken complete control of themselves. But the palace has not been rebuilt. Its shutters and debris bestow hope that the emperor, having slept properly, forgot how to keep himself in captivity, stopped seeing everything at once, and therefore, seeing something else, finally left his chamber. 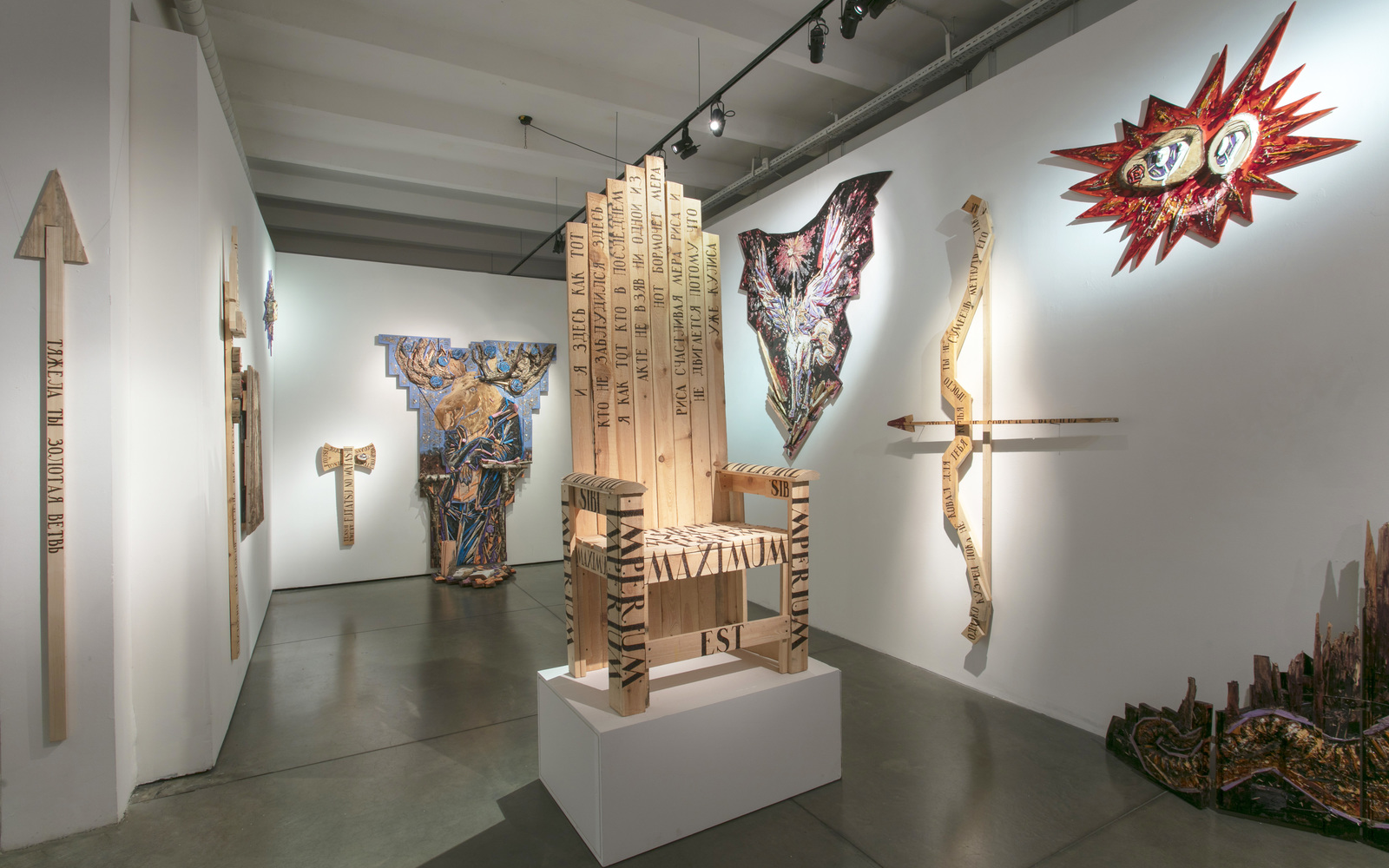 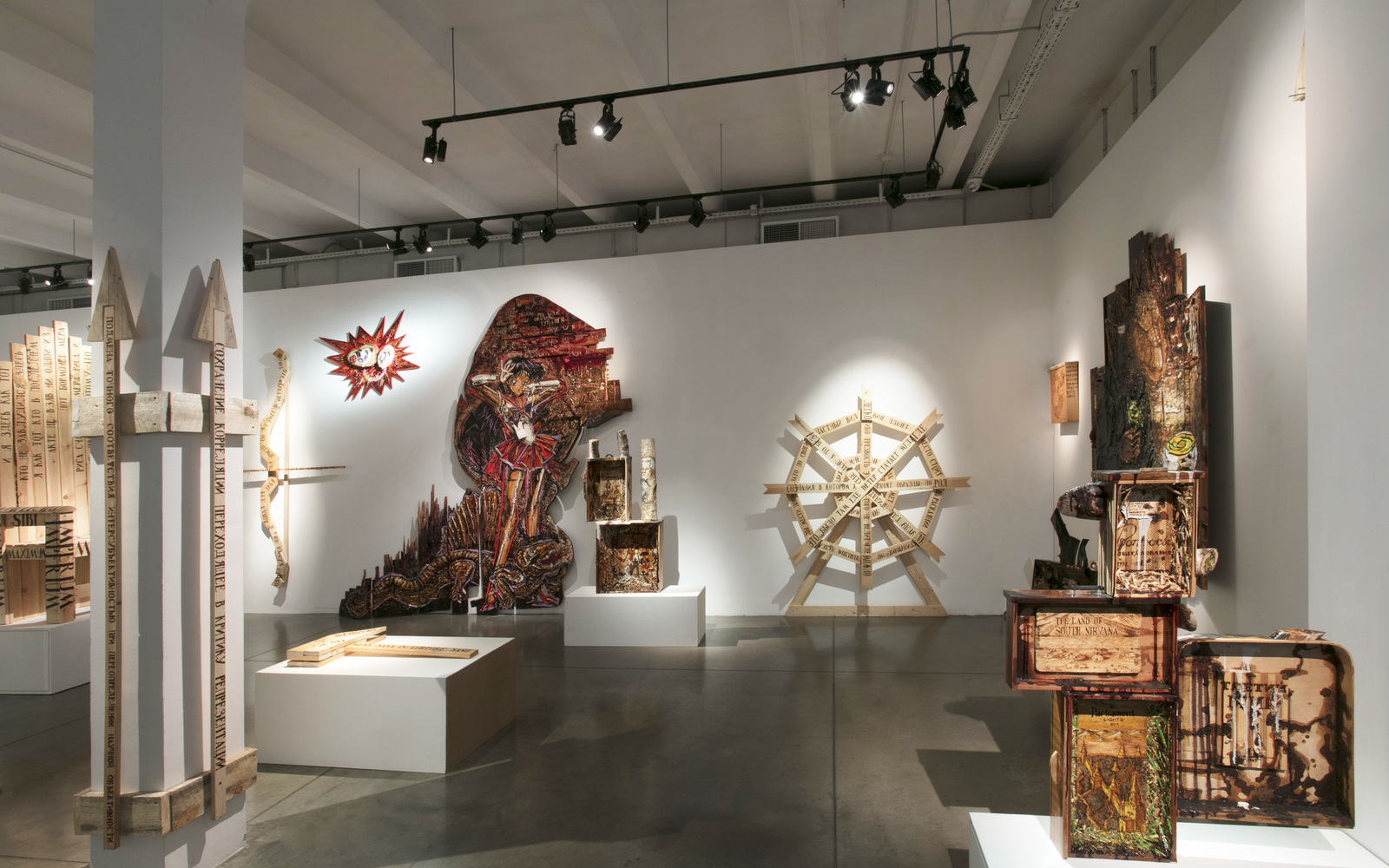 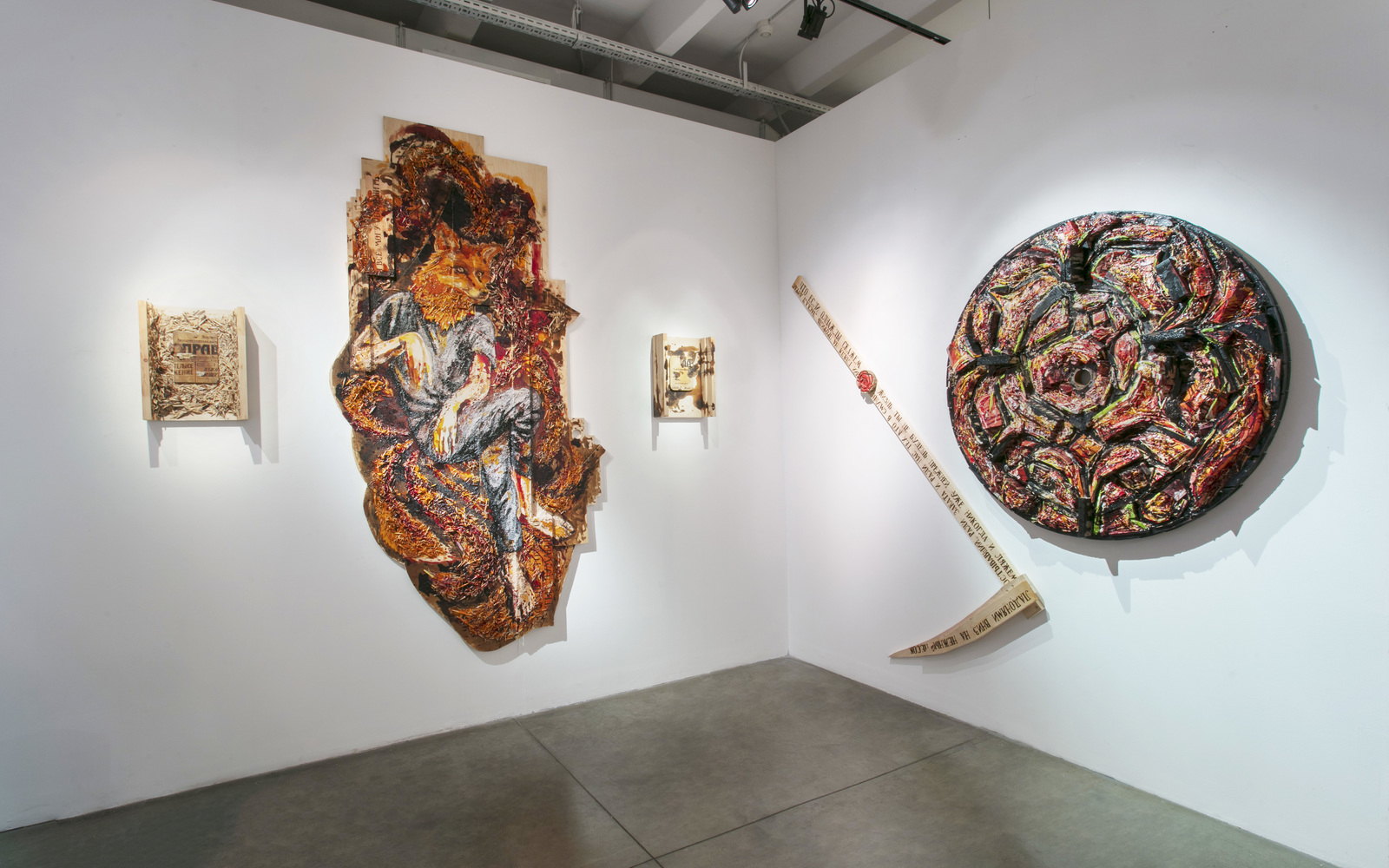 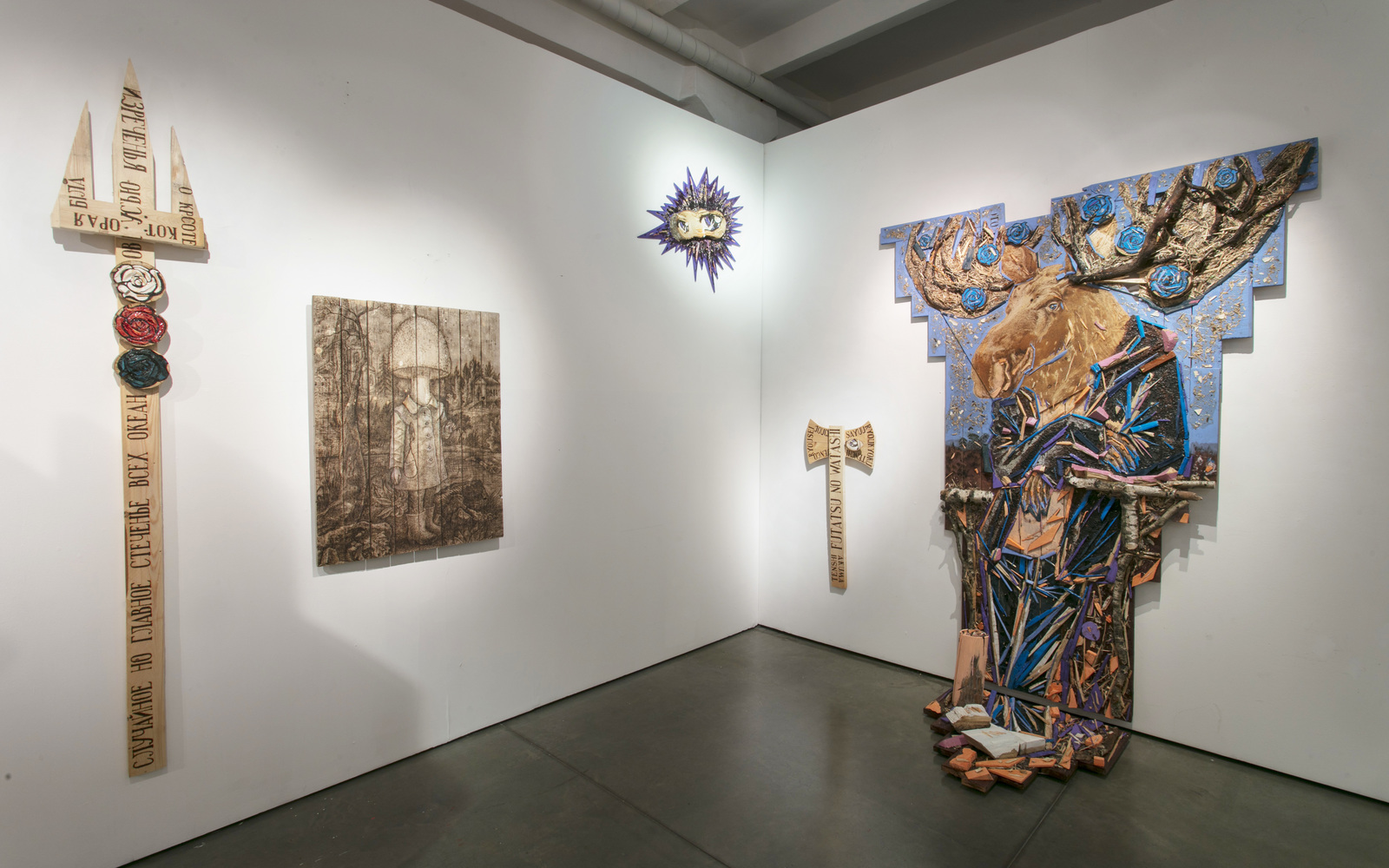 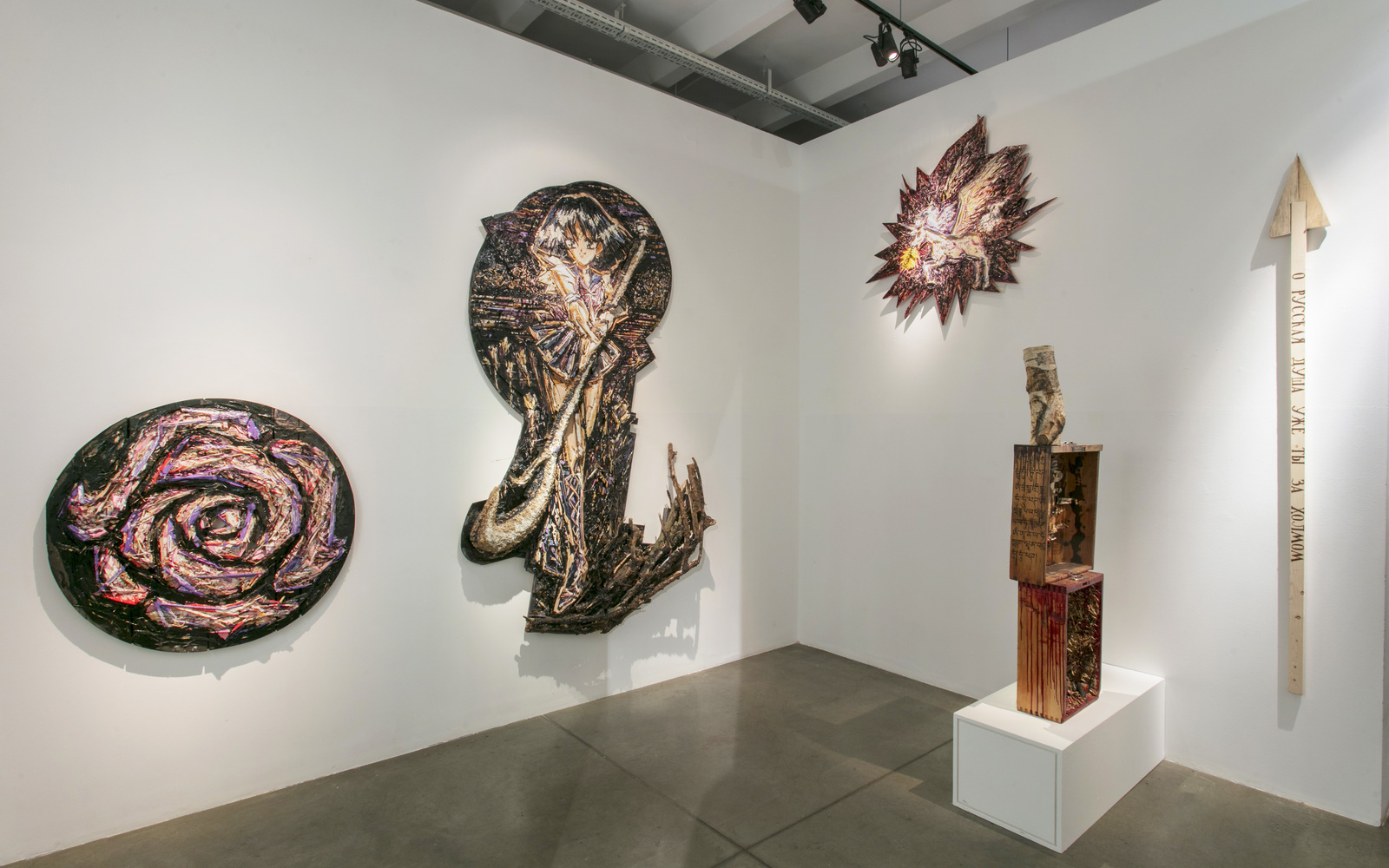 Le renard empereur from the series «the night before transgression», 2020

Leviathan from the series «maximum imperium», 2021

Pluto/La Liberte from the series «the night before transgression», 2020-2021

The Hierophant from the series «the night before transgression», 2020

The Siren from the series «the night before transgression», 2020

The Wheel of Fortune from the series «The Emperor's Toolkit», 2021

Unicorn the Boss from the series «the night before transgression», 2020