VLADEY presents a solo exhibition «Dancing ghosts» by the Russian artist, participant of the Venice Biennale (1995, 2009), Alexey Kallima within the framework of the «Artist of the Week» program.

The exhibition features a new picturesque series of nine works, the main characters of which are ghosts. Their appearance in the work of Kallima is connected with the search for a new hero. While the image has not been formed yet, the artist finds inspiration in such, one might say, anti-heroes – the faceless ghosts of past eras.

The artist has intentionally depersonalized his dancing heroes: their eye sockets glow with emptiness, there is no soul in them. Couples, engaged in wild dances, flash in the rays of the spotlights. The party of the «supernatural forces», imprinted in the paintings of Kallima, simultaneously attracts and repels the spectator with its unbridled fun.

When creating the series «Dancing Ghosts», the artist used a watercolor technique in painting, applying paints in a thin layer, leaving the streams and lumens of the canvas. The paintings of this series resemble the principles of the French art group «Nabis» late XIX — early XX century: pure color, decorativeness, flatness. An experimental search – a combination of pure colors, balancing each other, has become the main thing for Kallima in «Dancing Ghosts». We see them clashing in the images of dancing couples. The color works in such a powerful way that the figures, with a close look, begin to seem semi-abstract – this is Kallima's favorite method, with which he has been working for many years already.

A short mystical story about a certain young artist who studied at the Academy of Liberal Arts in the Alps serves as a background to this project:

«This happened in the town of Grenoble in the Alps, where the beauty and greatness of nature corresponded to an equally beautiful and harmonious architecture and equally kind and reputable local citizens. Besides, the Academy of Liberal Arts is known for having existed there for several centuries. That is where our Alekhno Cherchich studied, more specifically – at the faculty of painting. In his class, the task at that time was to work on the topic of «Couple dancing». The date of viewing was approaching, and Alekhno, unsatisfied with his work, stayed up late that night and decided to spend the night in the studio… A full moon was shining through the window. Works of his fellow students (the types of dances and the painting styles were all different) were surrounding him. A heavy smell of paint thinner was in the air.

The consciousness was already half asleep. Having breathed in enough of the vapours, Cherchin noticed coloured spots in his eyes at some point. And here he saw himself, not painting anymore, but dancing happily with his girlfriend. Music was playing and new characters were appearing. The situation was becoming more and more magical and insane. The space rotated vigorously, with the changing of the music and dance partners…

He woke up in the morning, awakened by his excited classmates. All his works were finished and re-done. They were united by a common style. Questions poured out at Alekhno, but he understood nothing and remembered nothing. The CCTV camera showed interference in the form of picturesque abstractions. However, Madame Petit Fou – the old lady from the opposite building, said that she paid attention to the usually dark window, which that night was shining with a bright and strange light….

Alekhno Cherchich has since become a little afraid of oil painting. Constant remorse before his classmates and a shaken consciousness prompted him to quit the Academy, and move to the seaside following the advice of his doctors. Interestingly enough, ghosts have since settled in this town…» 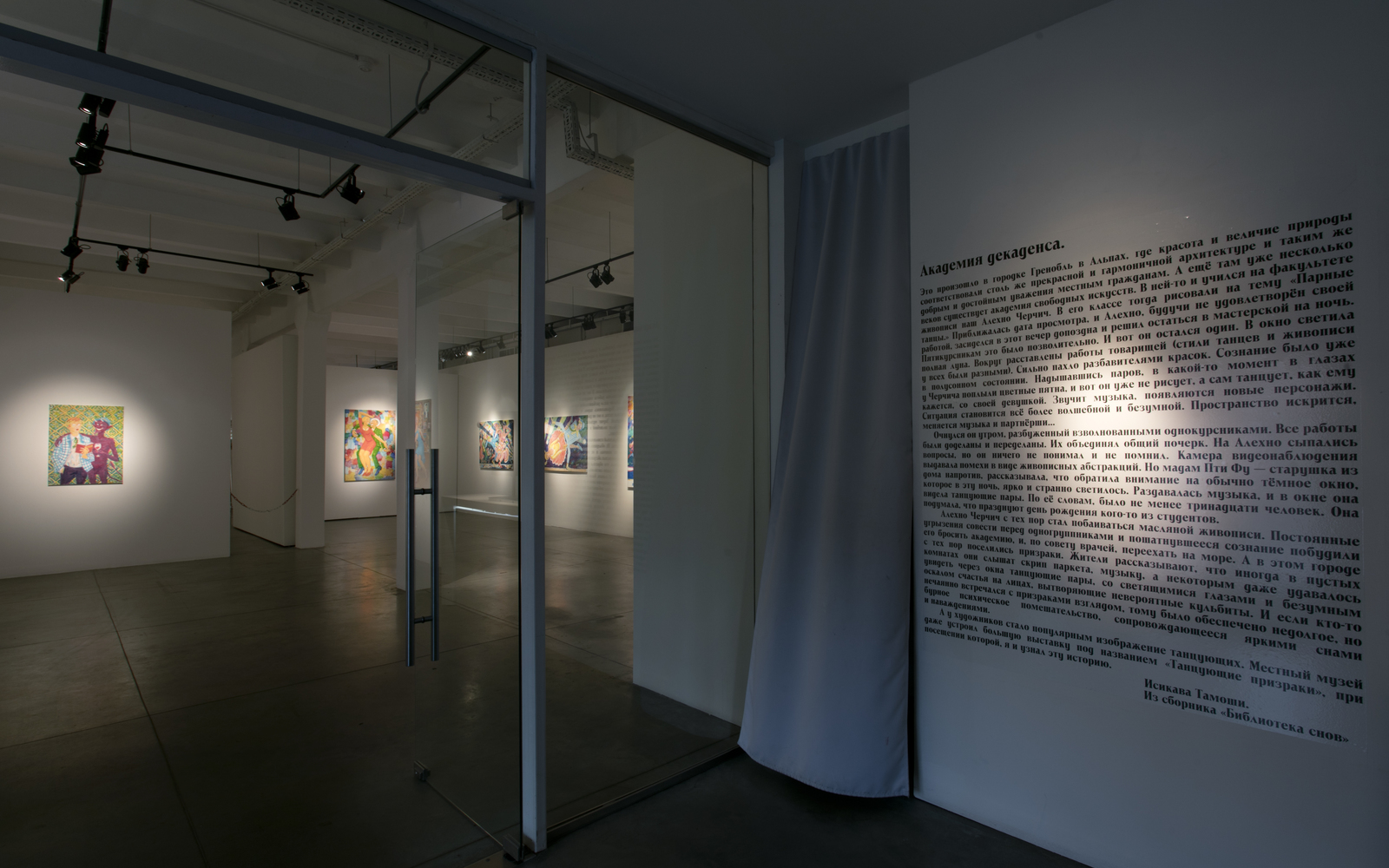 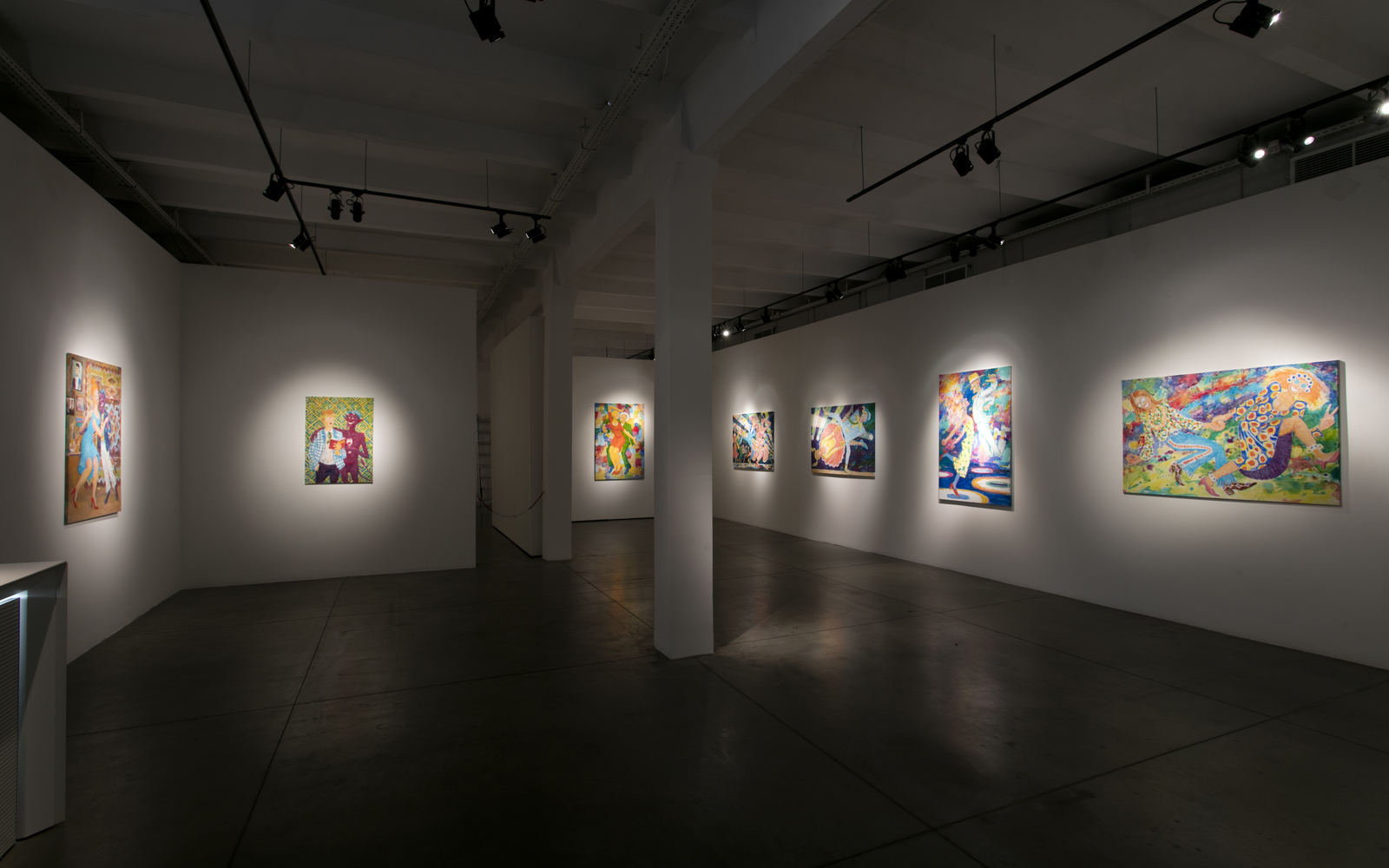 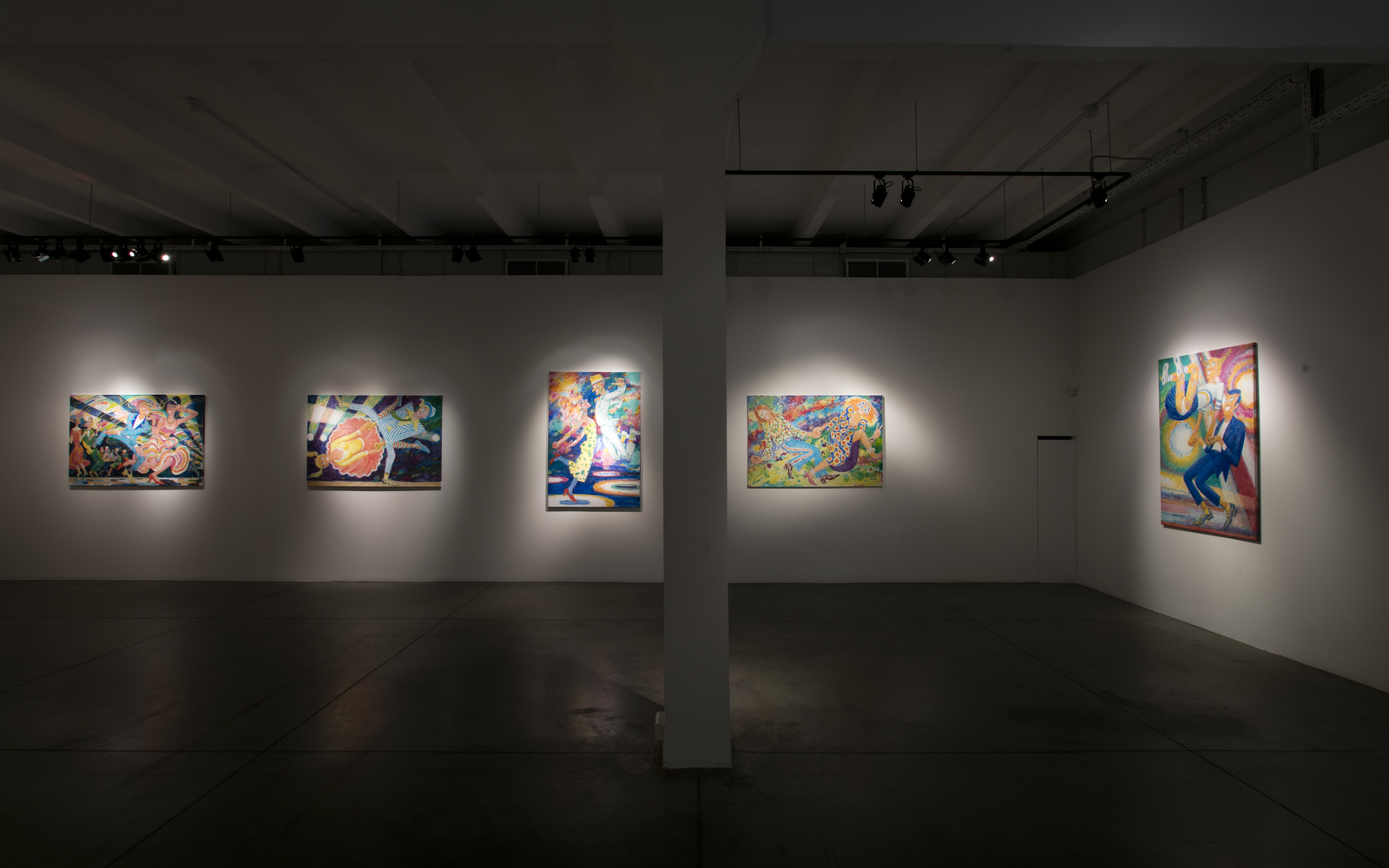 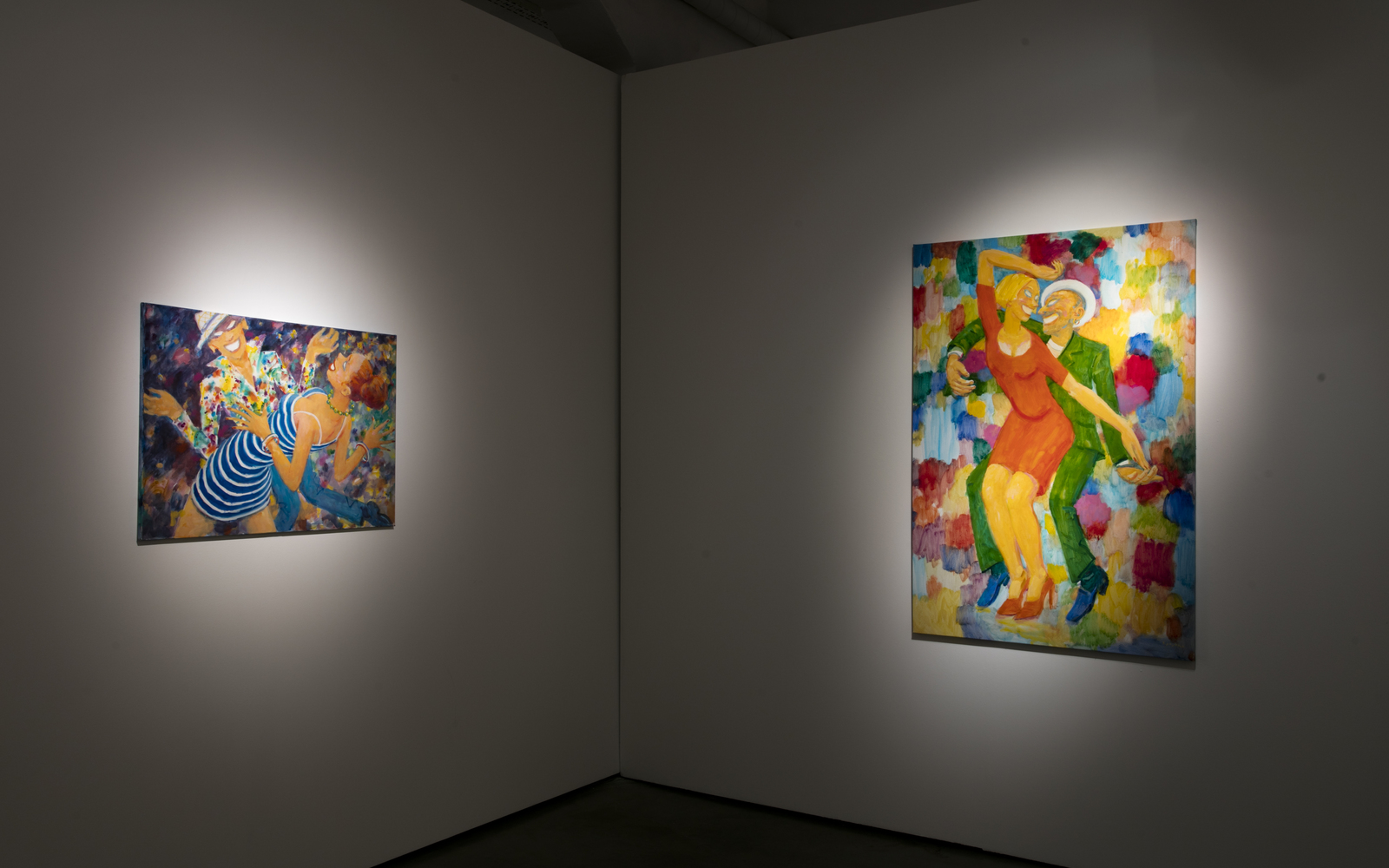 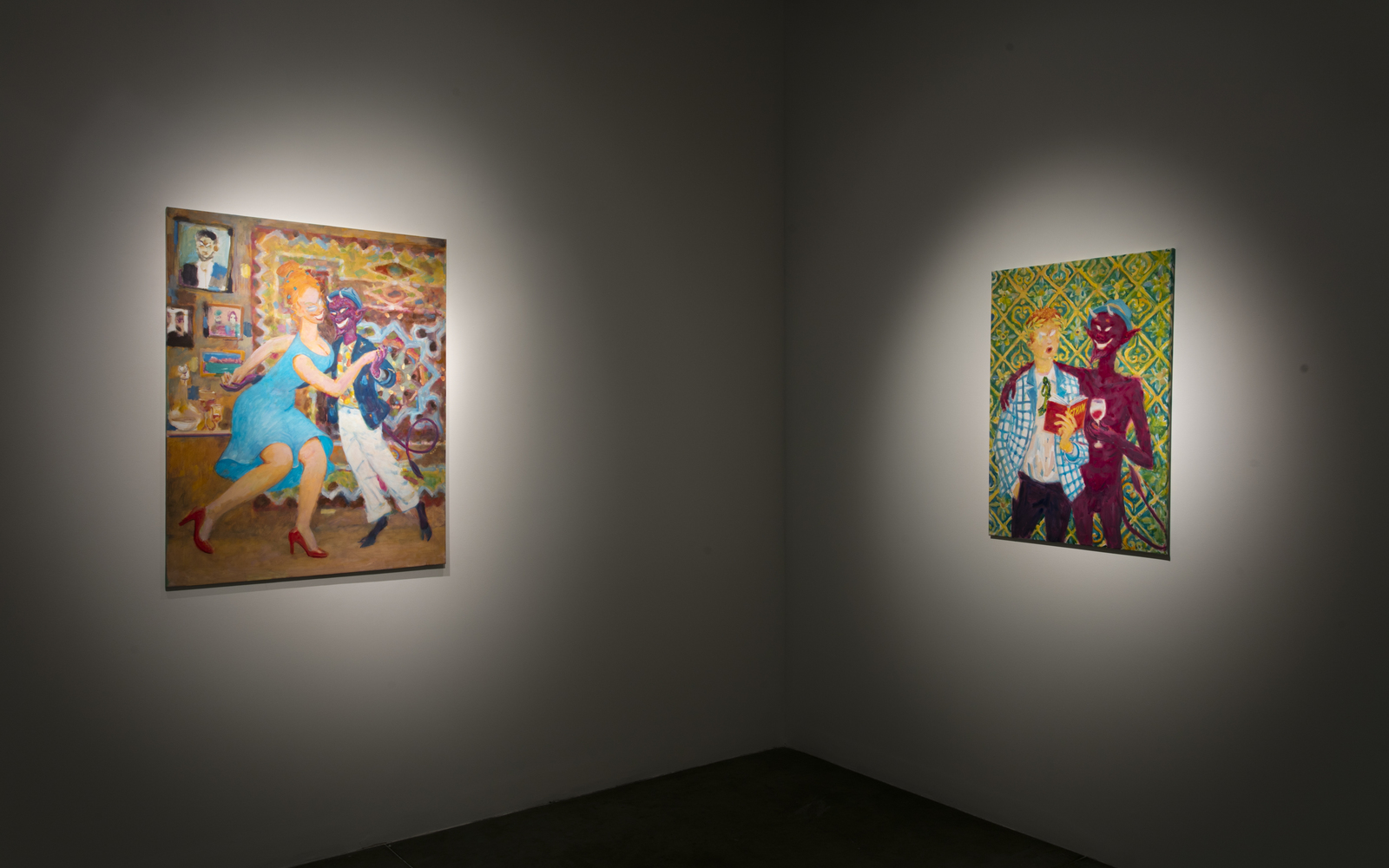 The young lady and the devil from the series "Dancing Ghosts", 2017

The poet and the devil from the series "Dancing Ghosts", 2017